Use the Full “Camera Stage” to Spark Interest and Variety 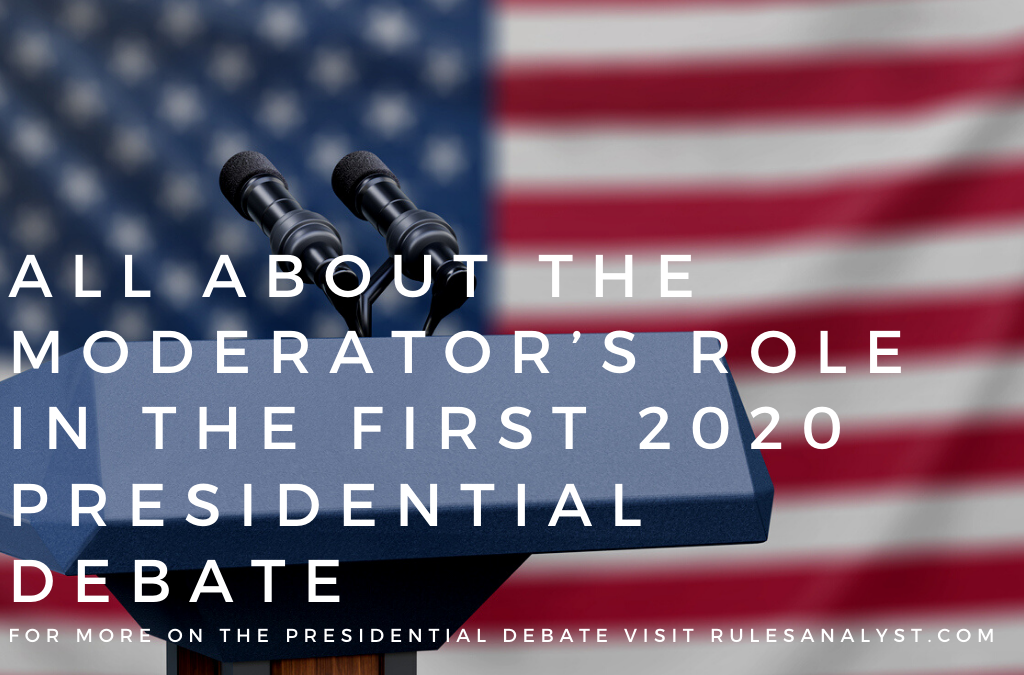 The first 2020 Presidential Debate is scheduled to take place next week on Tuesday, September 29, where President Donald Trump will face off former Vice President Joe Biden.  Deemed to be one of the most-watched TV programs this fall, (think Super Bowl-level viewership – although, unlike the SuperBowl, there will be no commercials during the debate!),  Fox News Host Chris Wallace will be the lone debate moderator. His job is to tee up topics that are of interest to the American public – and keep the conversation flowing and on track.  Talk about herding cats!

As the Presidential Debates “Rules Analyst,” here’s a summary of interesting facts about the role of the debate moderator:

How Presidential Debate Moderators Are Chosen

The Commission on Presidential Debates (CPD) is a nonpartisan group that has overseen all general-election debates since 1987.  The CPD has sole discretion to pick the moderators and uses three criteria in selecting the moderators:

The moderators are typically announced several weeks before the debates (September 2, 2020).  Except for a couple of exceptions, a single moderator is used for Presidential (vs. primary) debates.  Although this year, the decision for a single moderator could be a reflection of the coronavirus pandemic and the need to maintain social distancing.

The presidential candidates are not allowed to vet or to veto the choices.  Although this year, President Trump’s communications director, Tim Murtaugh, issued a statement “claiming, without evidence, that ‘some’ of the chosen moderators ‘can be identified as clear opponents of President Trump’ and charging that Mr. Biden ‘will actually have a teammate onstage.'”

According to the New York Times, “Mr. Murtaugh did not say which of the moderators he was accusing of bias, and the Trump campaign did not clarify when asked for additional comment. He also wrote that the choices ‘are not the moderators we would have recommended if the campaign had been allowed to have any input.'”

Well, no!  Candidates are not allowed to have any input! Commission co-chairs, Frank J. Fahrenkopf Jr., Dorothy S. Ridings, and Kenneth Wollack, wrote in their announcement,

“We are grateful to these experienced journalists, who will help ensure that the general election presidential debates continue to serve their unique educational purpose of helping the public learn about the candidates. Each individual brings great professionalism to moderating and understands that the purpose of the 2020 debate formats is to facilitate in-depth discussion of major topics.”

President Trump’s least favorite anchor on Fox News, Chris Wallace, whose tough grilling in a one-hour interview last month was must-see TV, was selected as one the first 2020 Presidential Debate moderators. He is also the only one of the four who has prior Presidential debate experience.  Mr. Wallace received high marks for his debut debate in 2016 and is known for his sharp interviewing style.

According to Stuart Emmrich, “he received strong reviews from longtime political observers and even rival journalists.” Wallace “delivered a sterling performance,” said CNN, “focusing on substantive issues that matter to American voters.”

According to Factly, “the Presidential Debate format has significantly changed over the years. Each debate during the initial Lincoln vs. Douglas debates lasted three hours, with the first speaker speaking for an hour followed by the second speaker who was given time for an hour and a half. The first speaker was then given 30 minutes for rebuttal.

For the 2020 debate year, the CPD said, “This year’s debates will build on the successful 2012 and 2016 debate formats which introduced longer segments, allowing the candidates to focus on critical issues.”

No Audience at the First 2020 Presidential Debate

With the COVID crisis, the first debate will not have an audience.  It’s not an unprecedented move. After all, the first televised debate in 1960 didn’t have an audience. During the next round of debates in 1976 the host (the League of Women Voters) vetted the studio audiences and instructed them to be quiet.

Our first pandemic-period presidential primary debate without an audience was during the Biden/Sanders debate. New York Times’ Michael M. Grynbaum reported that there were “no jeers or cheers disrupting the proceedings, no playing to the crowd by the two men onstage. The candidates, typically armed with punch lines and YouTube-able zingers to make the most of limited speaking time, had ample room to dwell on substance. Moderators had the grace and good sense to stay silent when the candidates questioned each other directly.”

The Slate’s Fred Kaplan confirmed that “The debate between Joe Biden and Bernie Sanders was more focused than usual not just because the match was one-on-one, but also because the format—a small network studio with no live audience, meaning no campaign staffers or other partisans egging their candidate on—held no rewards, and thus no incentives, for red-meat applause lines or shouting…Sunday night’s contest showed that, in the absence of a crowd cheering on the combatants’ more pandering tendencies, a debate can be a useful exercise after all—a way to gauge the candidates’ views and character.”

Interestingly enough, the topics are selected by the moderator.  The Commission on Presidential Debates (CPD) announced the six topics – selected by Moderator Wallace. The topics were announced in advance “in order to encourage deep discussion of the leading issues facing the country.”  But they are still “subject to possible changes because of news developments” – just in case something else “new” happens!

Each segment will have a dedicated a 15-minute “block” of time to fill 90 minutes of the first debate. Although “the moderators will have the ability both to extend the segments and to ensure that the candidates have equal speaking time.” (Note: these topics are not in priority order, or in the order the topics will be addressed):

The CPD also announced that “while the focus [of the debates] will properly be on the candidates, the moderator will regulate the conversation so that thoughtful and substantive exchanges occur.”  Yet Eddie Scarry, in an Op-Ed piece for the Washington Examiner says, “That sounds innocuous, and it would be if not for the fact that the national media (members of which will be moderating the debates) have proven themselves utterly incapable of regulating anything, let alone ‘thoughtful and substantive’ conversation.”

Okay, let’s give Moderator Wallace the benefit of the doubt, give some credit to his experience, and the role he is expected to fill:

Should the Presidential Debate Moderator Fact-Check the Candidates?

That word, “regulate” has a few media pundits worried.  Scarry continues, “Are Wallace and the moderators of the subsequent two debates at liberty to ‘regulate the conversation’ by jumping in to declare matters of opinion false? Are they at liberty to ‘regulate the conversation’ by halting a line of attack to deliver one of their searing ‘fact checks,’ which, as we’ve seen time and time again, are unreliable?”

I say no, absolutely not.  During a debate (as opposed to an interview when Wallace did indeed “press Trump as few Fox journalists have”), it’s up to the candidates to call out the disparities and for the media to weigh in post-debate.  That being said, the moderator can ask probing questions to delve deeper into the logic and reasoning of the assertion – if time allows.  Ninety minutes goes incredibly fast and the moderator has to pick and choose where to probe deeper.

Glenn Kessler, of the Washington Post’s Fact Checker, is wary of live fact-checking during the debate by a moderator. “People who are watching the debate want to see how the candidates answer, react. They really don’t care about the moderator.” Kessler agrees that “moderators can needle the candidates into exposing flaws in their arguments by pushing them to clarify their point.”

To counter that argument, Poynter Fact Checker Alexios Mantzarlis says “egregious falsehoods…ought to be called out.” PolitiFact editor Angie Holan concurs: “The moderator shouldn’t sit there like a potted plant while a candidate says something that is obviously inaccurate.”

At the very least, it will be a lively debate watched by millions across the country and around the world.  Stay tuned for the next blog where I’ll be covering how Moderator Wallace does herding cats!