9th Democratic Presidential Primary Debate: The Gloves Are Off!

Everything Panel Moderators Should Discuss With Their Meeting Organizer 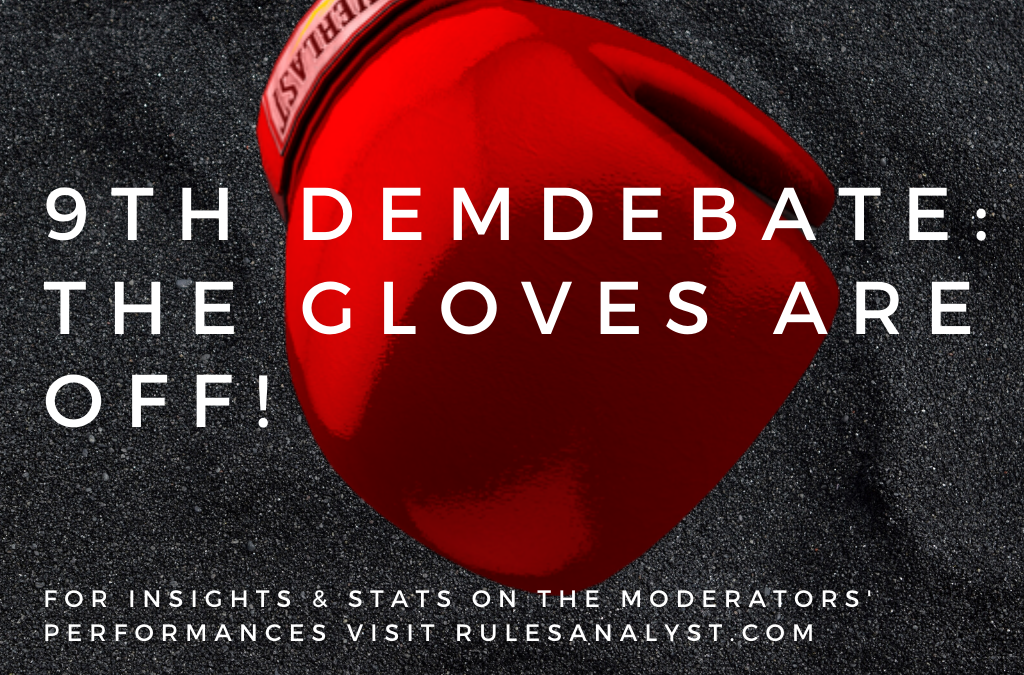 NBC/MSNBC wanted and expected big ratings with the introduction of Bloomberg to the Democratic Presidential Primary stage.  So the moderators set the tone with a new ground rule:  Since there are only six candidates on stage, “We encourage you to directly engage with each other.”  OMG!  My head started spinning…

Why?  Because the previous eight (count ’em – EIGHT) debates were tightly controlled:  Question; answer.  Follow-up or rebut.  Notice a hand raise (like in school – teacher, can I speak now?) and allow a response or two.  Infrequently, a loud voice would interject to command the stage.  Not this time.  It was much more free-flowing with candidates chiming in with the moderators creating airspace when a candidates’ name was invoked (thereby allowing a rebut).

The debate started with Moderator Lester Holt making a lengthy preamble about Mayor Michael Bloomberg.  He then posed a direct question to Senator Bernie Sanders:  “Why is your revolution a better bet?”  Then a counter-question back to Bloomberg: “Can Sanders beat Trump?” Warren interjects, hitting Bloomberg HARD:

Warren said, “I’d like to talk about who we’re running against. A billionaire who calls women fat broads and horse-faced lesbians, and no I’m not talking about Donald Trump, I’m talking about Mayor Bloomberg,” You could hear the audible gasps in the debate hall.

Oh my, this is NOT your typical debate!

Klobuchar piled on and then Bloomberg finally got a chance to rebut saying, “That’s a lot to respond to!”  Vice President Joe Biden then chimed in, taking another swipe at Bloomberg.  Mayor Pete Buttigieg piled on by talking about “Bernie and the Billionaire and let’s put forward someone who is actually a democrat.”

And at that point, every single candidate had taken the gloves off and came out swinging. Whatever promises the candidates made to each other to be civil and polite just went to the wayside.  They are all battling to come out on top and this debate was structured to compare and contrast the candidates – their current vs. past positions, their plans vs. other candidate plans, and their perceived electability.

Oh my, this could be the very first debate we’ve seen (even though this is the ninth Democratic Primary debate).  At least it was only two hours – which, IMHO is the perfect amount of time to have a debate.  2.5 hours is just too long.

The debate moderators distributed the questions and the airtime fairly evenly (although I am not sure why Biden was only asked four questions).  Bloomberg was the “fringe” candidate and new to the debate stage, so it is not surprising that he had the least amount of airtime.  What IS surprising to me is that his name was invoked as much as Sanders – which means he had the opportunity to respond to his fellow candidate comments – and either chose not to or didn’t press it enough to get recognized or heard.  I chalk this up to inexperience.  After all, the other candidates have had eight other debates and numerous town halls to get prepared.

“Mayor Buttigieg really has a slogan that was thought up by his consultants to paper over a thin version of a plan that would leave millions of people unable to afford their health care. It’s not a plan, it’s a PowerPoint,” she said. “And Amy’s plan is even less. It’s like a Post-it note: ‘insert plan here.’ Bernie has started very much — has a good start. But instead of expanding and bringing in more people to help, instead, his campaign relentlessly attacks everyone who asks a question or tries to fill in details about how to actually make this work. And then his own advisers say, ‘Eh, probably won’t happen anyway.’”

Everybody’s hands went up (other than Bloomberg!) to respond to Warren’s rant.  The camera even flashed to Todd (which rarely happens in the middle of a run) and he deftly said, “I got you…she name-checked you, so we’ll start with you [Mayor Buttigieg].  He allowed Buttigieg to respond, then went to Klobuchar and then on to Sanders.  Then he recognized Biden and put Warren in the “queue” to respond next.  When Biden was done, he called on Warren to provide “the final word” before they moved on to the next question.   Tense situation and he handled it well.

The moderators also choose a different question strategy than previous debates:  Typically, one moderator would ask all the questions in a specific topic category: healthcare, electability, climate, gun control (BTW, where was gun control?   I would have thought that would be an important issue for Nevadans?).  In this debate, they parsed out two or three questions for each moderator, and then would move on to a different aspect of the same category or on to another category.  And sometimes, those transitions were quite abrupt.  Even though the candidates wanted to keep talking, the moderators started asking the question.

The most telling question of the night was the final “Lightning round” question before closing comments – “Should the person with the most delegates at the end of this primary season be the nominee even if short of a majority?”  Everyone, with the exception of the frontrunner, Bernie Sanders, said “No.  We need to trust the process.”

And so we need to trust the debate process allowing the American voters to gain a better perspective of the positions and plans of the various candidates.  I’m now actually looking forward to the next debate….in just six days!  See you then!