Everything Panel Moderators Should Discuss With Their Meeting Organizer 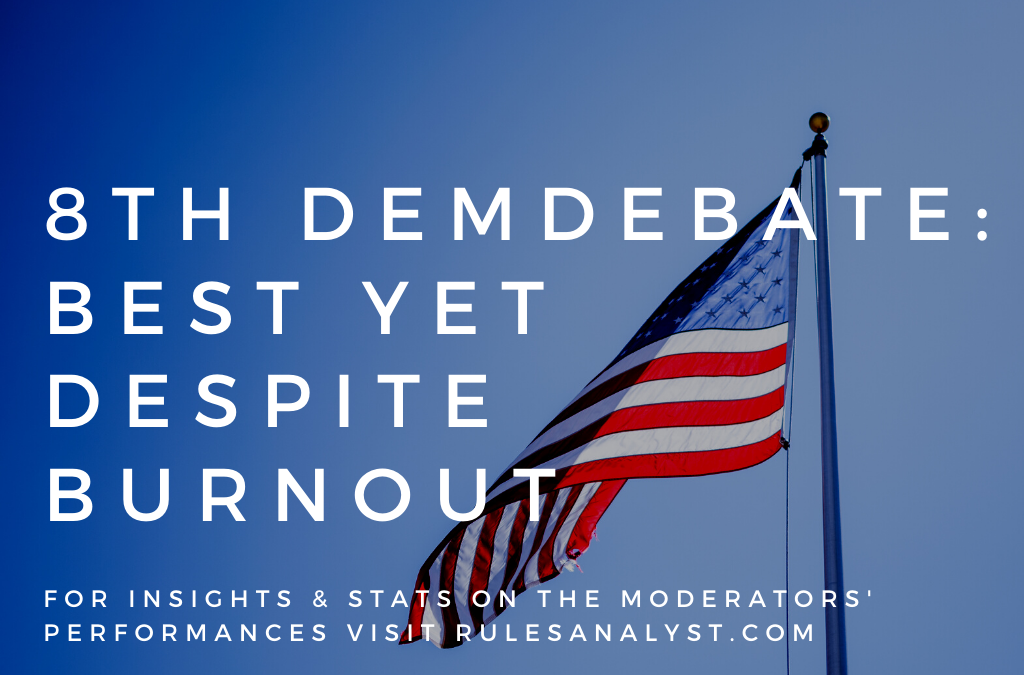 The 8th Democratic Presidential Primary Debate was interesting…although not a whole lot of people were watching.  Perhaps it’s a case of political burnout from the State of the Union address, the impeachment trial, or the Iowa Caucus debacle?  Who’s to know?  But I CAN tell you that the debate moderators did a pretty decent job  – and we saw some techniques that we haven’t seen for a while…or ever.

Veteran moderators George Stephanopoulos, David Muir, and Linsey Davis moderated the 3rd Democratic debate together – and they significantly amped up their game.

The EXACT SAME THING happened with the second question posed to Sanders. There was an immediate follow up to a challenge to his answer based on the Iowa Caucus statistics.  It was a clear signal to the candidates that the moderators wanted ANSWERS to their questions!  Not an unreasonable ask; however, that has not always been the case.  And when a candidate migrated a bit too far from the original question, the moderators reigned them in.

Moderator Stephanopoulos is the first moderator I have seen to use the “queue technique” during this debate season: the moderator acknowledges the person to speak, as well as the next person in line (or “queue”) and possibly one or two others.  I like this technique as it keeps presidential candidates from raising their hands like schoolchildren for an interminable amount of time.

I also thought it was interesting that the moderators allowed the “fringe” candidates (Steyer and Yang) to respond, “interrupt” the queue, or just to jump in.  Even so, Yang still had the lowest amount of speaking time!

Speaking of speaking time, I thought these debate statistics are truly interesting:

Let’s parse this down a bit: 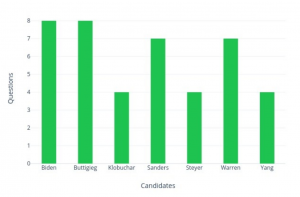 2.  Take a good look at who got the most “responses” – that would be Senator Klobuchar.  “Responses” are when the moderators choose to recognize a candidate to add to the conversation.  So what is going on here that she would get more opportunities to speak?

And who got the most “rebuttals” – where the moderator mentions the candidate in the question OR in the response of a fellow candidate, they mention their name?  It is not uncommon for a front runner to have the majority of the rebuttals. So what does this say about Mayor Buttigieg? Guess he is being mentioned a lot and Klobuchar, not at all.  Read into that what you like… 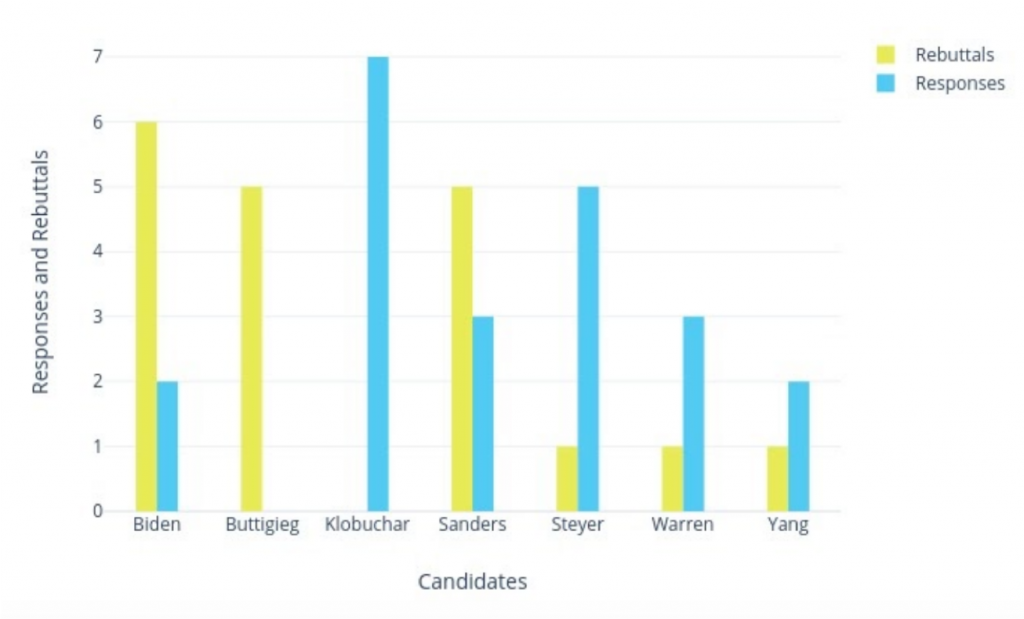 3.  What about those yellow and red lights that were supposed to keep people on time?  The initial response time was supposed to be 1:15 minutes.  True to course, Andrew Yang was the only one who kept to his time limits.  EVERYONE else went over time.  Rebuttals and responses are supposed to be 45 seconds.  Gosh, everyone blew that out of the water (other than the one rebuttal Tom Steyer had)!

So what’s with that?  These stats are wayyyy over time!  I can only recall a moderator saying, “Thank you” (which is the polite way of cutting off a future President of the United States) just a handful of times.

The third question was directed to all the candidates….and no one knew what to do with it!  Moderator Stephanopolous asks, “Is anyone concerned about having a nominee who is a democratic socialist?”  WHAT????  Oh my!  Oy vay!   The candidates all looked like deer in the headlights until Senator Klobuchar took the bait.  (I thought the “raise the hand if you agree” technique was banned from the democratic primary debates – so it was a surprise to all of us!)

The other technique I appreciated was the re-framing of a question then directed to another candidate.  Rather than recognizing a candidate who wanted to pile on to the conversation, they would recognize the candidate to speak, but then give an interesting twist to the question or aspect to the same issue. [I’ll provide an example when I can access the transcript]:

I just wish the topics covered new ground that voters care about.  We started with “elect-ability.”  Is anyone going to say that they are “unelectable”?  Heck no.  So why ask that question?

Or questions related to the impeachment of Trump or an investigation “When you become president…”  I suppose I’m suffering from political burnout, but I think there are more substantial issues that we haven’t even touched on.

Finally, I didn’t hear any blatant leading or loaded questions.  But then again, I usually have to read the transcript to see what lies under the hood.

I thought there were going to be five moderators – and there were, kinda sorta.  The two moderators from the local New Hampshire affiliate WMUR-TV’s Monica Hernandez and Adam Sexton got to stand (elsewhere) and ask a few questions about the decriminalization of drug offenders and gun policy.  I hope these are the most crucial questions that New Hampshire voters care about….but I don’t know.  I don’t live in New Hampshire.  Although I spend my summers in Canada, which, well, New Hampshire shares a border with Canada.

Yet, I was impressed with both Hernandez and Sexton.  In their limited airtime, (2:10 and 1:24, respectively), they clearly showed their moderator “chops”: Hernandez followed up on her question to Buttigieg on the decriminalization of ALL drugs and Sexton re-framed a question to Biden that was initially posed to Sanders.

My prediction about Biden:

As mentioned in my previous articles, he needed to speak up and speak more.  And yes, he did, kinda sorta.  He got the most number of questions directed to him AND the most number of rebuttals.  So you would think he would have the most airtime.  Nope, he didn’t.  He came in second to Sanders.  I had to laugh when he finished answering a question posed by Moderator Sexton with “My time is going to be up shortly.”  Whaaaaat?  Why do you say that when everyone else is going over time?   So curious.

All in all, I think this was one of the best-moderated debates in this debate season.  Perhaps it is because they worked together before (moderating a debate does take some getting used to), or the fact that there were only seven people on stage, or that the intense amount of scrutiny was simply lacking:  This debate was on a Friday night (competing with TGIF), this is the 8th (count ’em) debate, and people are just TIRED of political commentary.  Can we just hear some good news?

I don’t know if this is good or not, but we have another debate on February 19 – less than two weeks away – with potentially one more candidate to add to the stage.  Isn’t this going the wrong way?  Aren’t we supposed to be winnowing the field rather than increasing the number of candidates?

Oh well, the race isn’t over by a long shot.  Stay tuned!

Photo: Taken off my laptop computer!