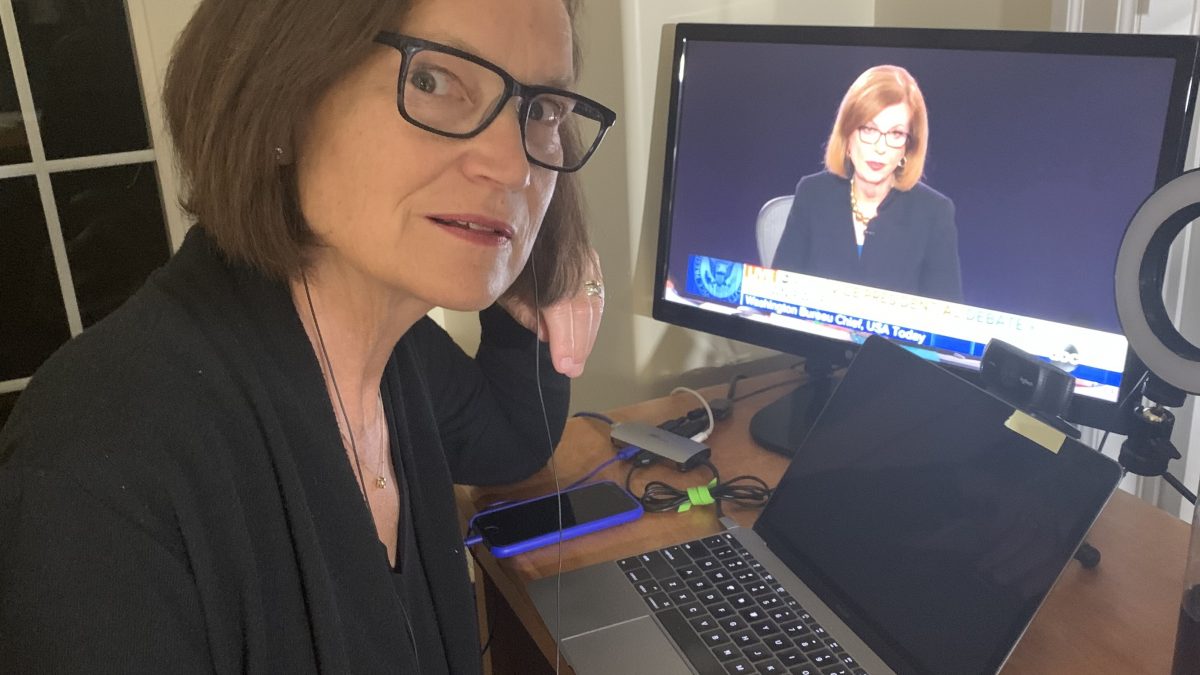 Susan Page moderated the debate – complete with plexiglass shields and both candidates sitting down. (Now that’s a first!).  It is also the first time I have seen the camera view to be split-screen between the candidates at all times (other than a shot to the Moderator when changing segments or making a comment).  I have to think the setting and the precedent had a calming effect on the evening.

The process as prescribed by the Commission on Presidential Debates was a bit different than the first presidential debate:

“The debate will be divided into nine segments of approximately 10 minutes each. The moderator will ask an opening question, after which each candidate will have two minutes to respond. The moderator will use the balance of the time in the segment for a deeper discussion of the topic.”

For the most part, the two candidates complied with the uninterrupted part for the first question in each segment – although both extended their comments past the two-minute mark.  Vice President Mike Pence would speak longer than Senator Kamala Harris, with the Moderator constantly interrupting saying “Thank you.  Thank you.  Thank you.”  After three thank you’s, she would emphasize, “Your time is up.”  And then if the candidate still didn’t finish, then she would explain her role, “I did not create the rules.  I am here to reinforce them and to give you each equal time.”

Mission accomplished, Moderator Page! Each candidate had roughly the same number of questions and about the same amount of airtime:

The weird part comes in the “deeper discussion of the topic.”  Even though it was not stated, it appeared that Moderator Page was going through a long list of questions rather than allowing the candidates to debate and rebut each other.  After timing them for a bit, it seemed like she was allowing 1 minute for the discussion responses between candidates before she would start interrupting them and 90 seconds for a candidate to respond if she asked another question on that topic during the deeper discussion. So if you use that metric, both candidates went overtime about the same amount – although it felt like Pence was interrupting more as Harris would stake her claim for uninterrupted time during the deeper discussion.

Even though Moderator Page’s strategy was to rifle-shoot questions at the candidates, she didn’t press them for a direct answer to the question, nor asked many follow-up questions. As candidates dodged a question, the moderator would allow them to go over time if it appeared they were going to finally answer the question (e.g. Pence’s answer about the Rose Garden), challenge their opponent to answer (“let’s talk about packing the court”), or both of them would pull out the trump card (no pun intended) and simply state “I really have to respond….” or “I’d like to respond…” and even though time was up and we needed to go to the next segment, we sat and listened.

While it was a comparatively civil debate (and better than last week’s debate, but I was wondering, could it be worse?), I am dismayed that the presidential debate moderators don’t create a process for “deeper discussion” that clarifies who speaks and when they are allowed to speak.  Most debates have initial comments, then rebuttals.  Timeframes.  Clear lines of what is acceptable behavior.  And then enforce them.