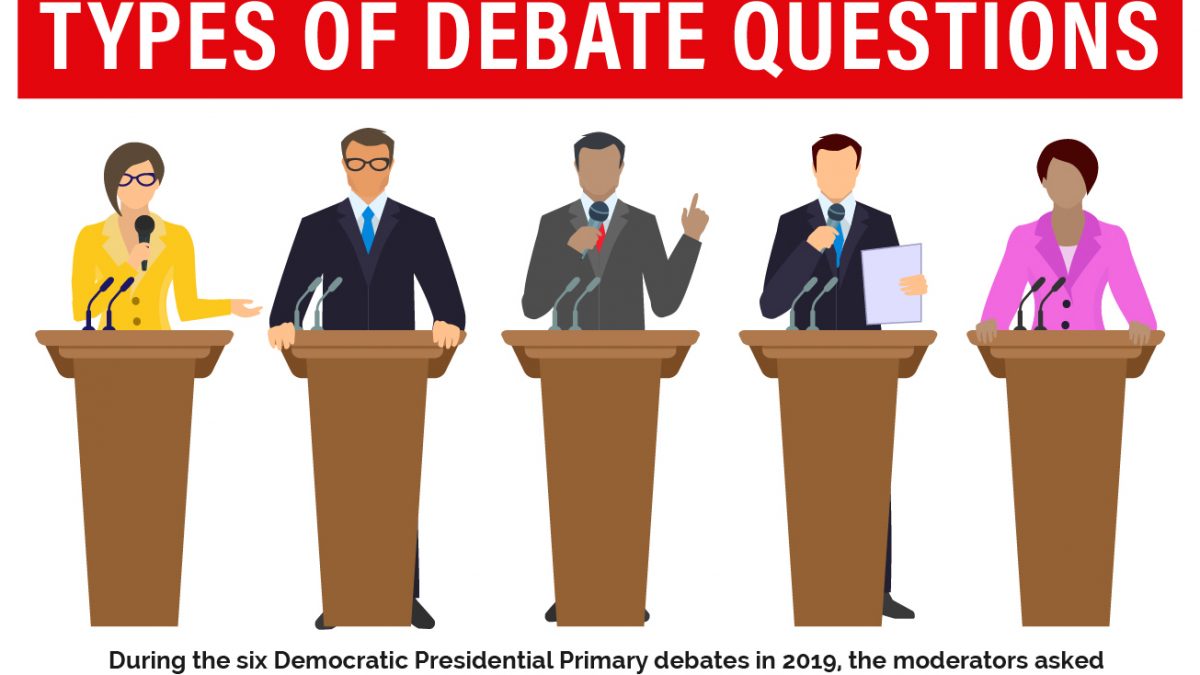 Yes, we know that panel moderators should curate a list of brilliant questions to ask the panelists during a panel discussion.  But how do you format the questions?  Ahhhh….that’s a good question about questions!  To look at this a bit methodically,  I took a deeper dive into the 2019 Democratic Presidential Primary debates.  Of the 425 questions asked over eight debate nights, sixteen different types of questions emerged:

The most simple and most used type of question is the Statement Plus a Question (often called Stem Plus Query – SPQ) in that it starts with a statement (or two) that provides context for the question.  An example of this was when Moderator Rachel Maddow asked Mayor Pete Buttigieg, “American farmers are struggling under the effects of President Trump’s trade war with China. The Trump administration’s payments to farmers to offset those losses already have a price tag that is more than double what was spent on the Obama administration’s auto bailout. Mayor Buttigieg, would you continue those farm subsidies?”

A type of an SPQ is one in which the Statement Contains a Quote and then followed up with a question:

Another type of SPQ is one in which the statement contains an intriguing Statistic with a relevant question.  For example, a question directed at Mr. Andrew Yang during the 2nd  Democratic Debate: “Mr. Yang, women on average earn 80 cents, about 80 cents for every dollar earned by men. Senator Kamala Harris wants to fine companies that don’t close their gender pay gaps. As an entrepreneur, do you think a stiff fine will change how companies pay their female employees?”

Another type of an SPQ is one in which the statement is a brief summary of the panelist’s position and the question is a request for the panelist to Explain Their Position for the benefit of the audience – usually to compare and contrast their position from the other panelists.  For example, a question directed at Ms. Marianne Williamson during the 2nd Democratic Debate: “Ms. Williamson, many of your opponents support a commission to study the issue of reparations for slavery. But you are calling for up to $500 billion in financial assistance. What makes you qualified to determine how much is owed in reparations?”

Perhaps the panelist’s position has changed over time.  The moderator may state the prior position with a follow-up question: “Have you Changed Your Mind?”  (Otherwise known as the “flip-flop” question).  For example, a question directed at Vice President Joe Biden during the 3rd Democratic Debate: “In a conversation about how to deal with segregation in schools back in 1975, you told a reporter, ‘I don’t feel responsible for the sins of my father and grandfather, I feel responsible for what the situation is today, for the sins of my own generation, and I’ll be damned if I feel responsible to pay for what happened 300 years ago.’ You said that some 40 years ago. But as you stand here tonight, what responsibility do you think that Americans need to take to repair the legacy of slavery in our country?”

Speaking of positions, sometimes the panelist is asked to Comment on a Fellow Panelist’s Position.  For example, a question directed at Congressman Booker during the 4th Democratic Debate: “Senator Booker, a [Sanders’] federal jobs guarantee or [Yang’s] $1,000 a month, are those the best solutions there?”

A slight variation to commenting on a fellow panelist’s position is a simple question: “Do you Agree with a Fellow Panelist’s Position?”  Of course, the panelist will follow up with some commentary!  For example, a question directed at Senator Amy Klobuchar during the 2nd Democratic Debate: “In the last debate, Senator Warren said the politicians who are not supporting Medicare for All simply lack the will to fight for it. You do not support Medicare for All. Is Senator Warren correct?”

When the statement itself tees up a position, the question asks for Details About the Plan to accomplish the result and the ability to make it work.  For example, a question directed at Governor Jay Inslee during the 1st Democratic Debate: “We’re here in Miami, which is already experiencing serious flooding on sunny days as a result of sea-level rise. Parts of Miami Beach and the Keys could be underwater in our lifetimes. Does your plan save Miami?”

Sometimes, the question needs no embellishment.  No statements, no quotes, no statistics.  The moderator asks a Direct Question.  No fanfare.  No fluff.  For example, a question directed at Secretary Julian Castro during the 4th Democratic Debate: Secretary Castro, is impeachment a distraction?

Sometimes, the question is so darn good, the Question is Repeated and directed to another panelist.  For example, a question directed at Congressman Ryan during the 1st Democratic Debate: Congressman Ryan, same question. Should it be a crime to illegally cross the border? Or should it be a civil offense only?” I call this the “hot potato” and suggest using it sparingly.

There is also the Hypothetical question – the “what if” question.  For example, a question directed at Congressman Beto O’Rourke during the 1st Democratic Debate: “What would you do, Congressman, day one at the White House [about immigration]?”

Then there is the Human Interest question which enables the audience to understand the panelists as everyday people.   For example, a question directed at every candidate during the 3rd Democratic Debate: “No president can succeed without resilience. Every president confronts crises, defeats, and mistakes…What’s the most significant professional setback you’ve had to face? How did you recover from it? And what did you learn from it?”

So there you have it: The sixteen most common types of questions used in the 2019 Democratic Primary Presidential Debates.  There ARE more, but this is a good running start.  Perhaps you can use these formats to help curate your questions for your next panel discussion!