9th Democratic Presidential Primary Debate: The Gloves Are Off! 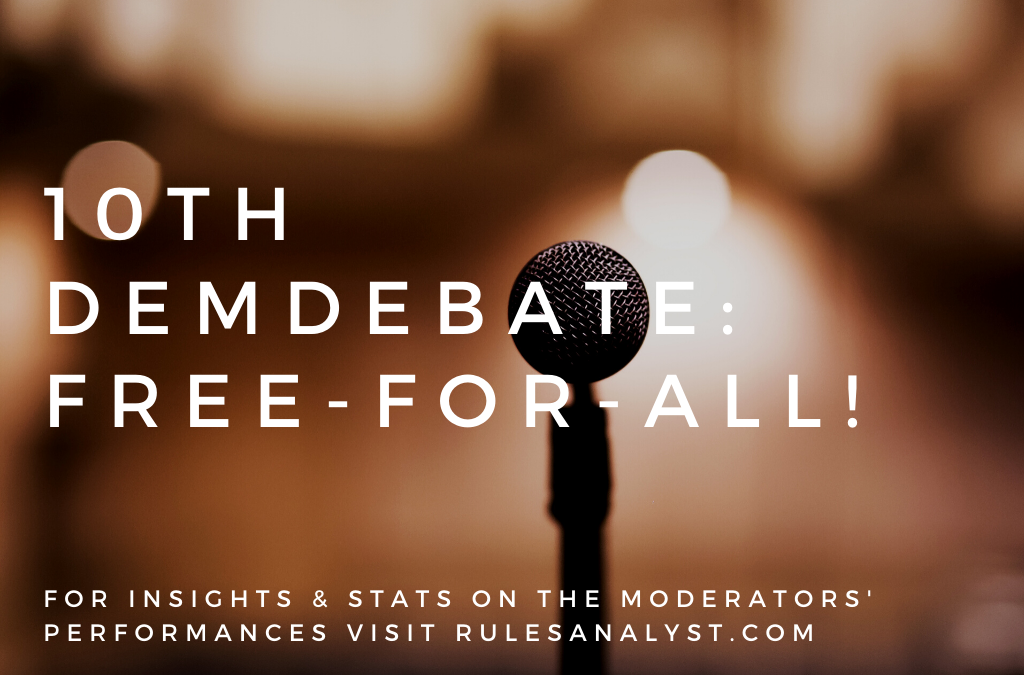 The 10th Democratic Debate was a free-for-all vs. a moderated debate.  Candidates put a big bulls-eye on Sanders and Bloomberg, jumped in without being recognized, talked over the allotted time, shouted over the ruckus, and complained about the moderators.  It got so bad, halfway through the debate, Moderator Margaret Brennan pleaded, “If you could honor the rules of the debate….”

Uh oh.  You know the debate has not been moderated well when rules-abiding Vice President Joe Biden comments, “Why am I stopping [talking] when no one else stops?”

The problem is that none of the moderators (and CBS this year) had presidential debate experience.  The primary moderators were CBS Evening News anchor Norah O’Donnell and CBS This Morning co-host Gayle King.  Face the Nation senior foreign affairs correspondent Margaret Brennan, chief Washington correspondent Major Garrett and 60 Minutes correspondent Bill Whitaker augmented the dais midway to ask a few questions (two of them from Twitter – which actually seemed like planted questions).  Moderating a presidential debate is far different than interviewing a few people on the TV stage.

We had seven candidates (one more than last week), so the ground rule of “engage each other directly” was NOT mentioned directly, yet, based on the behavior of the candidates, I assume it was still in place.

Senator Bernie Sanders was asked the first question about how he could convince voters that a democratic socialist could run the economy.  Sanders mentions Mayor Michael Bloomberg in his answer, so Bloomberg is allowed to speak and accuses Sanders of being helped by the Russians. (At this point, there’s an audible gasp/boo from the audience).  OMG – this is gonna be cutthroat politics!  Mayor Pete Buttigieg tried to gain the floor while Senator Elizabeth Warren barged in saying, “I’d make a better president.” Ultimately, Warren won the floor.

The first few minutes make or break the debate.  It sets the tone.  Moderators take control, state the ground rules and reinforce those ground rules.  People tune in or tune out.

The moderators knew this was a high-stakes debate. It’s not like they didn’t know this debate was going to be highly contentious.  O’Donnell said that morning, “What you’re going to see here tonight is an ideological fight for the heart and soul of the democratic party.”  (Watch this CBS segment with all five moderators on the debate stage talking about the debate, how important it was and the most relevant topics.  Can you send the signal any louder about what you are going to want to talk about?)

Yes, the candidates were fierce and feisty yet inexplicably, the moderators showed a lack of control.  Or perhaps this was intentional? Perhaps they were channeling Lester Holt’s 2016 “hands off policy“?

Somehow, I don’t think so. With a field of seven candidates, I think it was just poor moderation.

Let’s take a look at the stats:

First thing I notice is poor Tom Steyer.  Yes, he is a fringe candidate and didn’t qualify last time – but that’s no excuse. The American electorate needs to hear from him and understand why he is still in the race.  Only two questions directed at him?  Although I must admit, he was recognized five times to respond in order to give him more airtime.  However, he still had less than half of the front-runner’s time.  That’s just not fair.

Check out how often the candidates went over time.  Sadly, this is a chronic problem in the presidential debates, and unless there is a ground rule of some consequence, this behavior will continue to get worse.

There were far more crosstalks than normal – people vying for airtime – with the eventual “winner” being…..the loudest voice?  Toward the end of the debate, Moderator Brennan pleads with the candidates, “Please, one at a time.”  In a well-moderated debate, the moderate initiates a “queue” where the candidates indicate their interest in commenting, and the moderator tells the candidates and the audience who will speak first, then second, third etc.  This technique would have been highly useful during the see-saw conversation regarding the “math” of Sanders’ proposals.

So the first forty minutes were a bit chaotic – and then we took a commercial break.  Now maybe it was a scheduled break, or the producers needed to huddle with the moderators to get it under control, but it did get a little better…for a few minutes.

The selection of topics (which the moderators have almost complete control over) seemed to be a rehash of last week with a dose of weird (albeit new) topics: taking charter schools nationally, expunging marijuana records, and having sugary drinks at school (that’s a first!). At least they eventually talked the coronavirus – one of the headlines of the day. And what about Biden saying he was arrested in South Africa?  Now that would have been interesting!

The phrasing of the questions can sometimes be leading, loaded, or fraught with bias. At first glance (and I’ll have to read the transcript before I can fully weigh in), I think the questions were relatively straightforward.

The finish really made me rethink the entire debate.

1) What is the biggest misconception voters have about you?

Candidates answered and then we were done – or so I thought.  We were two hours and two minutes into a two-hour debate.  Moderator O’Donnell said, “That concludes this debate” and Moderator King countered with, “Time for one more break, Nora.  Time flies when you’re having fun.”  Whaaaaat?  And then we came back from break only to say that we’re done.  So weird.  Just reinforces that the moderators were not in sync.